Back in 2016, I created an account on medium.com just like (seemingly) everyone else on the internet. But I wasn’t sure what to do with it. I even started by writing a somewhat sarcastic post saying: “I’m writing this post on Medium for the first time ever. This is a test. Is there any compelling reason to post here rather than on my blog?”

Well, I guess there didn’t seem to be a compelling reason to do so. But then I stopped writing altogether, mostly because I was focusing on writing blog posts and articles on my clients’ websites, and not my own.

Well, here I am, six years later, deciding to try using it again. Which is strange, because it seems like it peaked in popularity somewhere around 2018 and has been slowly losing its audience since then. That’s a shame, because as a publishing platform, it’s absolutely genius. It has almost everything you could ask for, and it’s free.

So anyway, I need a place to write out my thoughts on a few projects I’m working on, including the podcasts/blogs Ron Voyage! and Micron, and a new project for freelancers and solopreneurs called Free Soloing and I’ll try doing that on Medium.

So, if you have any interest in following me, I think you should do so over at Medium and rather than here. Or you can do both; the likelihood is that I’ll keep posting updates at both places, so you can choose which platform is better for you. We’ll see how it goes! 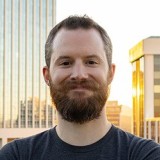 Ron Stauffer is a web designer, web developer, and internet marketer in Tucson, Arizona. He started his first company in 2008 and has been trying to help fellow solopreneurs and freelancers excel since that time. He like scuba diving, running, and swimming, and doesn't like writing in the third-person.