DENVER — In November of 2017, ink! Coffee, a locally-owned coffee shop with multiple locations in Denver found themselves in hot water after unveiling a marketing campaign gone wrong. If this story sounds familiar, it may be because we as a society have gotten used to controversy about coffee shops each year right around this time. But if you’re thinking ink! caused themselves a PR disaster due to the forgivable sin of not printing certain words on their paper cups at Christmas, you’d be wrong.

Unlike the annual fight over Starbucks’s paper cups during the holiday season, a highly unusual public row began at ink! that eventually involved—get this: customers calling for a public boycott of the company; hundreds of people lining up in the street actually protesting in real life; the involvement of the mayor of Denver; and vandalism of the ink! Coffee shop itself.

What kind of marketing campaign could cause such an uproar?

For some reason, a sign placed outside the coffee shop at the Five Points area on Larimer Street claimed the coffee chain had been “Happily gentrifying the neighborhood since 2014.” Strangely, that’s all the sign said. It said nothing of the coffee, the service, the community, or… anything else. Just the lone statement that ink! has been party to recent gentrification of a neighborhood.

So what’s the big deal? As many publications have pointed out, gentrification is unpopular in Denver—as it always is, everywhere—but especially in the Five Points neighborhood, which is a historically black neighborhood. Can you guess why a sign like this might be deemed offensive?

Why would ink! make such an unneeded move? Did they think it was funny or clever? Were they hoping that bragging about neighborhood gentrification would somehow sell coffee? Clearly, they were wrong. Not only did it not sell coffee, it caused a public spectacle, with condemnation from hundreds of users on Twitter, but also from the NAACP, and local city government leaders.

The ink! Coffee debacle is a fascinating insight into our culture in 2018. Most companies spend time laboriously thinking up new ways to let the public know they support “social responsibility” or engage in “sustainable” or even “socially conscious” business practices (whether they actually care about such practices or can even define them). Often, when these companies make a misstep, no matter how innocent, a CEO or Founder will step up immediately and commit to “making things right,” which usually includes profuse apologies, re-training of staff, and sometimes even donating money to causes that support training people not to make the same mistakes.

Yet, companies like ink! actively pay money to ad agencies and PR firms to create communication that insults their user base, then ignite a political debate in what would normally be a non-political business. (Really, what’s more apolitical than the nearly-universal and highly social drink, coffee?)

Ink! has made not one, but multiple apologies for “being offensive and disrespectful,” which may or may not actually make a difference.

The strange thing, however, for locals who are familiar with ink! Coffee and its overall brand voice is that they’re a company full of cognitive dissonance. For example, if you think a temporary sign placed for a day or so glorifying gentrification in a neighborhood notoriously unfriendly towards gentrification is bad, what should we make of this sign that has been up for months near Union Station? 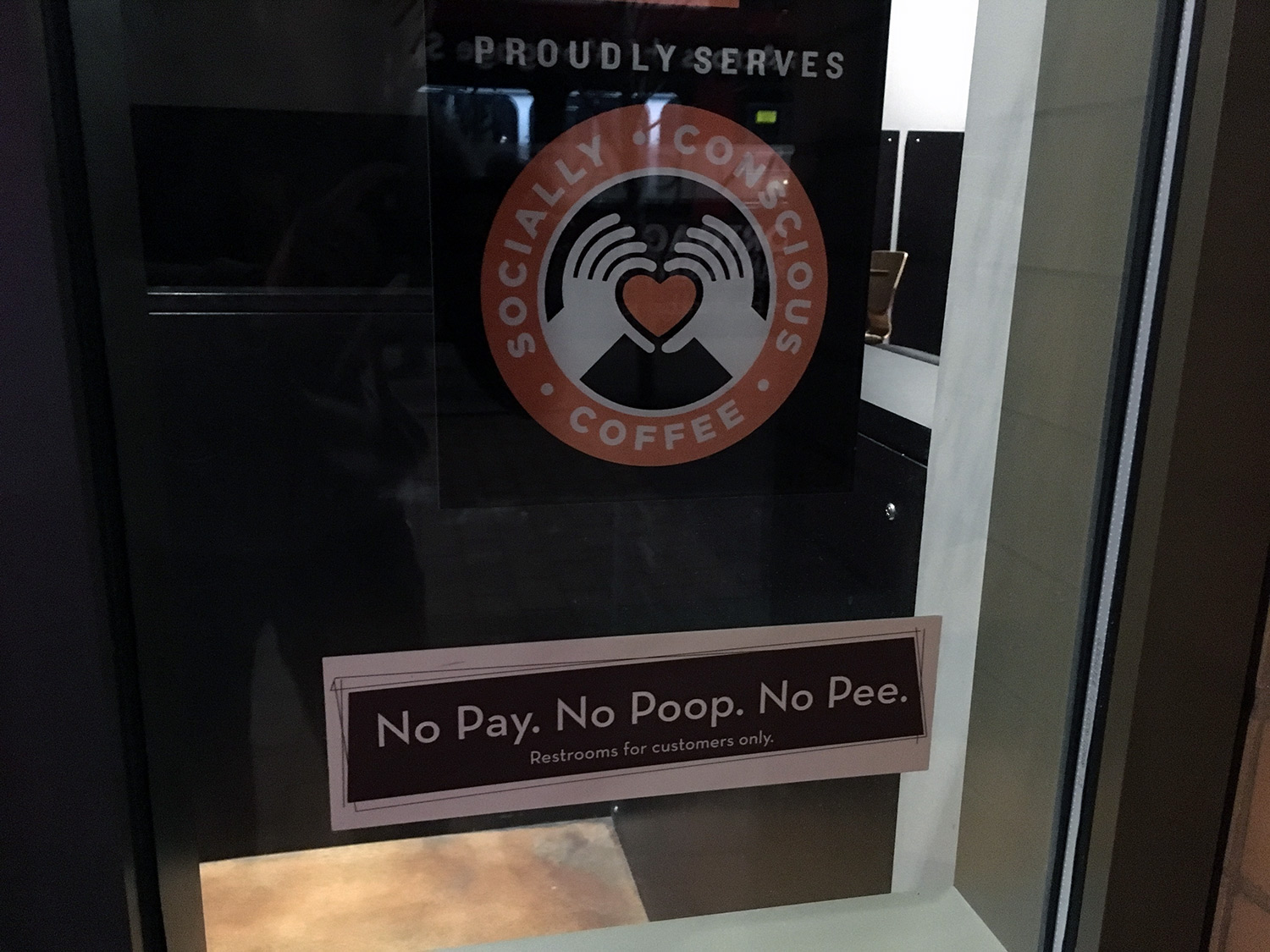 Union Station is at the heart of downtown Denver, which is filled with transient people, the poor, and the homeless. Yet, proudly displayed on the front door is a sign that states its restrooms are for customers only.

Of course, many companies have a “restroom is for customers only” sign—that isn’t new or particularly noteworthy. However, the sign telling people they’re not welcome to use the restroom is literally one foot below a sign above that states the company’s commitment to being “socially conscious.” What is social consciousness if not caring the basic welfare of local residents?

The ink! company website states: “we’re helping provide education, health care and environmental programs to the most economically disadvantaged people in the coffee supply chain” in Brazil. This irony is thick: the company is dedicated to helping farmers nearly 5,000 miles away pay for healthcare, yet has a sign on the front window specifically telling locals they’re not welcome to use the restroom if they’re economically disadvantaged? Is it any surprise they’d make a tone-deaf mistake with the sign in Five Points?

And why is this sign printed in such graphic terms? When is the last time you saw crude bodily functions printed on a sign near the front door of a coffee shop?

The confusing messaging from ink! is distasteful, and shows a problem deeper than just one sign placed on a sidewalk in front of a single store for one day. It may be a great example of showcasing what consumers have suspected for years: that it’s far easier for a company to engage in glad-handing about their “socially conscious business practices” when the people on the other end live in another hemisphere on the globe, but being a good neighbor is much harder.

That’s something that all companies, not just ink!, should be paying attention to. Perhaps rather than gentrifying a neighborhood, ink! should learn what it means to be a good neighbor in the first place.